Whose Voice Is in Your Head?

Are we as sensitive to God’s words as we are to the words of others? The other day I was talking with a friend about hurt feelings and sensitivity. I was asked, “You don’t seem like a super sensitive person, are you? Like, you don’t seem to get your feelings hurt easily.” In the moment before quickly responding, my mind raced through all sorts of scenarios in an attempt to decide if “being sensitive” was a good or bad trait. If I wasn’t sensitive, did that mean I wasn’t in touch with my feelings? But if I was sensitive, did that make me overly emotional and weak? I quickly responded with something about that I try not to let people’s opinions bother me too much.

Over the next couple days, I kept replaying the conversation in my mind. I doggedly questioned my sensitivity levels, digging up all the times I could think of where people hadn’t been kind to me and how I’d felt. Alternately, maybe they had been kind and I was unkind, finding insult where none was intended. A definitive answer alluded me, but God pressed the question into my heart with a new twist: Are you as sensitive to the words I speak to you as you are to the words of others?

Wow. This question I couldn’t answer so easily. After being honest with myself, I had to admit that I am not. When I put forth my best effort and someone is critical, why do I hear their words echo in my head instead of God’s sweet whisper that I am “fearfully and wonderfully made”? Why can we have an entire Bible’s worth of God’s love and faithfulness to us, yet dwell upon one un-nice word said to us?

As though God wanted to drive home this point, a woman marched up to me after church and wanted to discuss a “sensitive subject” with me. She went on to express her very critical thoughts about me personally. Taken aback, I floundered to know what to say and kindly hurried to end the conversation. The rest of the afternoon, I was at war with her in my head. I wished I hadn’t been so kind: I wished I had said something to put her in her place! Normally people regret the times they don’t bite their tongue, but I was so furious that I regretted that I *had* bit my tongue.

I later returned to the church to direct the choir, and a different woman came up to me and complimented me, out of the blue, on the very attribute that the former woman had attacked! What one woman had deemed “inappropriate,” the other praised as loveliness.

I wish I could say that I immediately pushed the rude woman’s comments out of my head on my own. I wish I could say I had been more sensitive to God’s words than hers. I wish that it hadn’t taken another woman’s compliments to erase the negativity I was carrying with me. However, God gave me this situation to awaken me to the words He had pressed on my heart earlier: “Are you as sensitive to my words as you are to the words of others?” I want to be, Lord. I really do.

“Finally, brothers, whatever is true, whatever is noble, whatever is right, whatever is pure, whatever is lovely, whatever is admirable — if anything is excellent or praiseworthy — think about these things. Whatever you have learned or received or heard from me, or seen in me — put into practice. And the God of peace will be with you.” Philippians 4:8

Welcome to our homestead!

I’m so glad you came over! I’m Cordelia, lover of all things handmade and homemade. Follow along for weekly posts about living a lifestyle that feeds not only the body but the soul! Read more about me here. 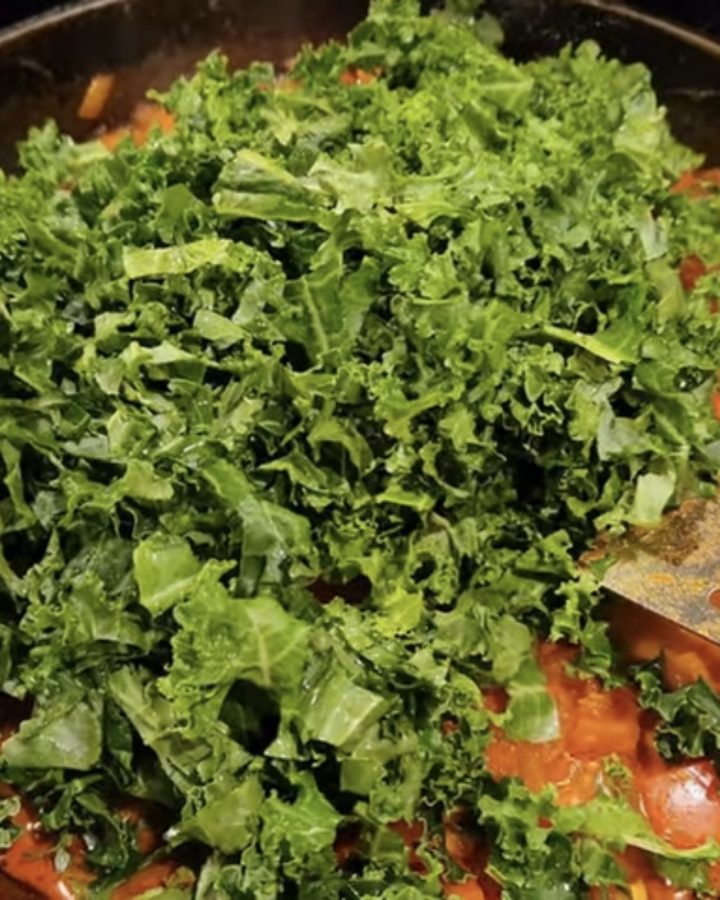 Sukuma wiki is a flavorful way to prepare kale and it’s quick and easy, too! If you want to follow along to see it being prepared, watch my video below, specifically at 7:25. Otherwise, jump to the recipe! Enjoy and God Bless, Cordelia Creek xoxo